Plant Based Lifestylediet
Save Your Money ~ Save Your Life

Diagnosing and Treating Vitamin B12 Deficiency 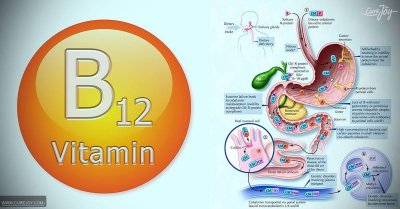 Most people believe they get sufficient B12 from their foods or multi-vitamins but is this really true?  B12 is added to a lot of flours and grain products in addition to fortified cereals and other foods.  Carnivores believe they get their B12 from the animal ‘meat’ they consume, but do they?
Microorganisms, primarily bacteria, are the only organisms known to manufacture B12. These bacteria are thought to live in water, soil, and the digestive tracts of animals.
Most of the ‘meat’ found in your local grocery store is sourced from factory farms, where animals are kept in pens and fed grain products and few/if any are grass fed where they can eat the dirt containing the microorganisms that produce B12.  Since Vegetarians and Vegans don’t eat ‘meat’ they also are often deficient.
As we age, we often produce less stomach acid.  Hypochlorhydria is the ten-dollar word for low stomach acid production. While most people think they have too much stomach acid, most of them don't have enough. In fact, somewhere between 23-35% of everyone over 65 years of age have hypochlorhydria as a result of just getting older. Many more have it as a result of taking drugs designed to reduce stomach acid production.
This reduction in stomach acids directly impacts the body’s ability to properly digest food and absorb the necessary nutrients essential for health.  Low stomach acid (high pH) can lead to nutritional deficiencies through decreased absorption of basic electrolytes (magnesium, zinc, etc.) and vitamins (including vitamin C, vitamin K, and the B complex of vitamins).
With all this, most people are deficient in B12, an essential vitamin compound to proper nutrient absorption; especially in the mitochondria, the energy producing engine of the cells.  Most doctors in regular lab tests just don’t know to test for B12 deficiency and when they do, a high level of folate may mask the true issue.  Since there is a mandate to add folic acid to cereals and grains in the USA, this may mask the actual deficiency of B12.


The stomach cells also produce a protein called intrinsic factor (IF), which travels to the small intestine. When the corrinoid-R-protein complex gets to the small intestine, the corrinoid is liberated from the R-protein by enzymes made by the pancreas. Of the liberated corrinoids, only the cobalamins attach to intrinsic factor. Intrinsic factor then carries the cobalamins to the last section of the small intestine, the ileum.
The cells lining the ileum contain receptors for the cobalamin-IF complex. The cobalamin-IF complex protects the cobalamin against bacterial and digestive enzyme degradation. The IF-receptor also ensures that cobalamins will be given priority for absorption over non-cobalamin corrinoids. In addition to the IF mechanism, passive diffusion normally accounts for 1-3% of B12 absorbed when obtained through normal food sources. Some inactive B12 analogues are most likely absorbed through passive diffusion.


Vitamin B12 deficiency can sneak up on you, and can lead to a myriad of diseases and disorders. Know the signs and symptoms. You could be deficient yet still test in the so-called range of "normal B12" on a blood test, especially if you have taken an oral B12 supplement of uncertain quality, or you have been under-treating the deficiency. Oral B12 supplements do not work for all patients; patients with digestive/absorption problems benefit from B12 injections, as do patients with nerve damage.
Intrinsic factor (IF), also known as gastric intrinsic factor (GIF), is a glycoprotein produced by the parietal cells of the stomach. It is necessary for the absorption of vitamin B12 later on in the ileum of the small intestine. In humans, the gastric intrinsic factor protein is encoded by the GIF gene.
Blood Work Warning Signs:
Elevated MCH - MCH stands for Mean Corpuscular Hemoglobin, and is a calculation of the average amount of hemoglobin contained within each of a person's red blood cells. Hemoglobin is the substance that carries oxygen from the lungs to the cells of the body through the bloodstream. Abnormally high or low levels of MCH, as determined by blood testing, can be an indication of a number of problems within the body, ranging from nutrient deficiencies to chronic diseases.
MCH levels over 34 pg are generally considered abnormally high. The most common reason for high MCH is macrocytic anemia, which is a blood disorder in which the body fails to produce enough red blood cells. In macrocytic anemia, red blood cells that are produced are larger than usual, each carrying more hemoglobin than normal-sized cells would. This condition can be caused by deficient levels of vitamin B-12 or folic acid in the body; nutrients found in foods like fish, liver, green leafy vegetables and fortified cereals. These contribute to efficient red blood cell production and may be lacking in your diet, you may not be able to absorb them or there may be other reasons your body cannot process them.
MCV - Mean corpuscular volume (MCV) laboratory test, as part of a standard complete blood count (CBC), is used along with other RBC indices (MCH and MCHC) to help classify the cause of anemia based on red cell morphology.  The MCV is higher than normal when red blood cells are larger than normal. This is called macrocytic anemia. Macrocytic anemia can be caused by: Vitamin B-12 deficiency.
Low Red Blood Cell Count (RBC) - Anemia is a condition in which the body does not have enough healthy red blood cells. Red blood cells provide oxygen to body tissues. Vitamin B12 deficiency anemia is a low red blood cell count due to a lack (deficiency) of vitamin B12.
B12 Tests:
Serum B12
A serum vitamin B12 level less than 180 ng/L may cause megaloblastic anemia and peripheral neuropathies.
Vitamin B12 levels less than 150 ng/L is considered evidence of vitamin B12 deficiency. Follow-up with tests for antibodies to intrinsic factor (IFBA / Intrinsic Factor Blocking Antibody, Serum) are recommended to identify this potential cause of vitamin B12 malabsorption. For specimens without antibodies, follow-up testing of vitamin B12 tissue deficiency by measuring methylmalonic acid (MMA) (MMAS / Methylmalonic Acid [MMA], Quantitative, Serum) and/or homocysteine (HCYSP / Homocysteine, Total, Plasma) may be indicated if the patient is symptomatic.
Patients with serum B12 levels between 150 and 400 ng/L are considered borderline and should be evaluated further by functional tests for vitamin B12 deficiency. The plasma homocysteine level is a good screening test. A normal level effectively excludes vitamin B12 and folate deficiency in an asymptomatic patient. However, the test is not specific and many situations can cause an increased level. In contrast, an increased serum MMA level is more specific for cellular-level B12 deficiency and is not increased by folate deficiency.
HoloTranscobalamin (Active - B12)
Holotranscobalamin represents only 10-30% of the Vitamin B12 circulating in the blood but is the ONLY form of Vitamin B12 that is taken up and used by cells of the body, hence it’s other name… ACTIVE-B12.  The transcobalamin-vitamin B12 complex is called holotranscobalamin (HoloTC). HoloTC contains the biologically available cobalamin as only HoloTC promotes the uptake of cobalamin by all cells via specific receptors. In comparison, approximately 80% of the cobalamin carried by HC is considered metabolically inert because no cellular receptors exist, with the exception of receptors found in the liver. The shorter circulating half-life of HoloTC compared to holohaptocorrin (HoloHC) makes a decrease of HoloTC one of the earliest markers of cobalamin deficiency.
Homcysysteine
A homocysteine blood test is done to: Help identify vitamin B12 deficiency or folic acid deficiency. To help determine if you are folate-deficient or vitamin B12-deficient; to determine if you are at increased risk of heart attack or stroke; to help diagnose a rare inherited disorder called homocystinuria
Methylmalonic acid (MMA Test)
The methylmalonic acid (MMA) test may be used to help diagnose an early or mild vitamin B12 deficiency. It may be ordered by itself or along with a homocysteine test as a follow-up to a vitamin B12 test result that is in the lower end of the normal range. MMA is a substance produced in very small amounts in the body.
Unsaturated B12 Binding Capacity
Vitamin B12 Binding Capacity, Unsaturated (Transcobalamin), binds and transports vitamin B12 in the circulation. Increased concentrations are associated with patients with myeloproliferative disorders. Decreased concentrations are seen in individuals with megaloblastic anemia or Transcobalamin deficiency.
Diagnosing and Treating Vitamin B12 Deficiency
Do You Have a B12 Deficiency?